Run-of-the-mill start as we introduce the team. Henry has quite a bit of echo since he’s now firmly ensconced in his rammed earth survival compound.

Big news this week! We finally received our 18th email in our first ever RadioFreeHPC email-to-win contest. First, let’s see what they win… 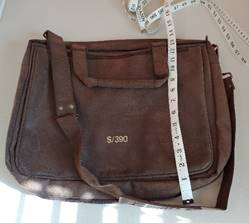 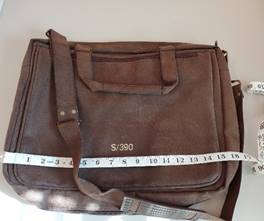 The first item in our Grand Prize bundle is a circa 1999 suede leather IBM S/390 laptop bag. It’s roomy at a generous 16”x14”, large enough to house the biggest 17” laptop or maybe 15 or 20 tablets. If that’s not enough room, it also expands an additional 4-5” on the bottom. There are compartments galore under the flaps and you’d better fill them up with soft foam since there’s really no padding around the laptop compartment.

The suede leather is a nice touch that adds weight to the bag, it’s not a lightweight in any sense of the word. We’d advise covering the bag if you’re going to be out in the weather, because the suede is sure to stain if it is exposed to water.

This bag is in brand new condition and has never been used. Ever.

The second piece of this cornucopia of delight is a IBM Mainframe 50th anniversary medallion. It’s a very light weight metal medallion housed in a stunningly clear plastic frame. Put it on your mantle at home and impress your friends and family with how important you must be to have such a keepsake.

The final gift is a cassette tape of an IBM Talk S/390 episode covering S/390 integrated solutions. If you still have a cassette player, this will provide minutes of mainframe tech talk, marketing tips and keys to closing that big deal.

So you want to know who won this amazing collection of swag? Listen to the show and find out, or follow us on Twitter and look a couple of weeks back!

Government Bills Aim to Up the Ante for Science

In the rest of the show we discuss some recent government news. First is that the US House is looking to devote an additional $1.25 billion over the next five years. But even bigger is the proposal to expand the US National Science Foundation by $100 beeelion – which is more than 4x the size of the existing organization. We discuss the implications of this and how this might change the game in terms of base research. There is also a bill to significantly dial up funding for Quantum Information Science. All good and the team s excited to see these moves and hopes they’ll proceed swimmingly!

Reasons Why No One Should Ever be Online. Ever.

Brace yourselves, GitHub has been attacked! Developers and users alike unaware that they’re downloading malware when they’re getting their open source on. Ouch.

Henry:  UK broadband performance is holding up in these virus-rampant times. Yay for the UK, great job.

Dan:  Skinny gene discovered! Eat all you want and never gain weight. Is it true?