RFHPC196: A Closer Look at the Summit Supercomputer at ORNL 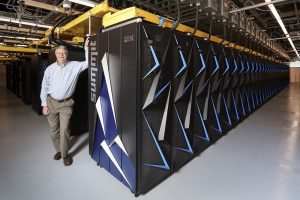 In this podcast, the Radio Free HPC team looks at the new 200 Petaflop Summit supercomputer that was unveiled this week at ORNL. Powered by IBM POWER9 processors, 27,648 NVIDIA GPUs, and Mellanox InfiniBand, the Summit supercomputer is also the first Exaop AI system on the planet.

This massive machine, powered by 27,648 of our Volta GPUs, can perform more than three exaops, or three billion billion calculations per second,” writes Ian Buck on the NVIDIA blog. “That’s more than 100 times faster than Titan, previously the fastest U.S. supercomputer, completed just five years ago. And 95 percent of that computing power comes from GPUs. Built for the U.S. Department of Energy, this is a machine designed to tackle the grand challenges of our time. It will accelerate the work of the world’s best scientists in high-energy physics, materials discovery, healthcare, and more, with the ability to crank 200 petaflops of computing power to high precision scientific simulations.

IBM designed a whole new heterogeneous architecture for Summit that integrates the robust data analysis of powerful IBM POWER9 CPUs with the deep learning capabilities of GPUs,” writes Dr. John E. Kelly from IBM. “The result is unparalleled performance on critical new applications. And, IBM is selling this same technology in Summit to enterprises today.” Summit takes GPU accelerated computing to the next level, with more computing power, more memory, an enormous high-performance file system, and fast data paths to tie it all together,” said James Hack, director of ORNL’s National Center for Computational Sciences. “That means researchers will be able to explore more complex phenomena at higher levels of fidelity in less time than with previous generations of supercomputer systems.”